I learned a new expression this week: Controlled Flight into Terrain or CFIT meant to describe a plane crash where a pilot unintentionally flies into the ground or a mountain. For anyone who flies around Nepal, this is a stark reminder of the risks. The day I read about CFIT on Twitter, a Nepal Airlines Canadian-built Twin Otter, the war horse of all planes, one of the few able to navigate Nepal’s uncompromising and unforgiving mountains and its short airstrips, crashed into a fog enshrouded mountain side, killing all 18 people on board. The flight bound for Jumla in the high Himalayas took off in dense fog and then asked to be rerouted before contact broke.

Traveling around Nepal is surreally beautiful but far from simple. 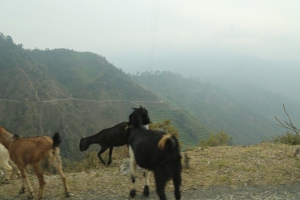 There are few paved roads and the dirt ones, mostly carved out of perpendicular mountain sides next to 1000 meter plunges are listed on maps as “fair weather” which means they are impassable for four or more months during the monsoons or by the frequent landslide. Many of the remote and desperately poor communities are only easily reachable by plane and on dirt airstrips that require STOL or short take offs and landings. But snow, fog and rain make navigating mountains treacherous so much so that airports, including Kathmandu’s, regularly close down for hours. 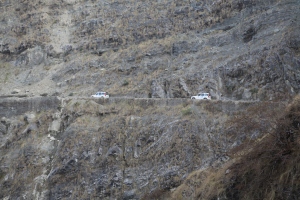 Paved roads in Nepal are few and far between. This is the only paved road into far Western Nepal. Here two UN vehicles navigate a narrow section © Donatella Lorch

This is the land of the Twin Otter. Maybe this crash was an anomaly?. Kunda Dixit, a renowned journalist and flying aficionado burst my bubble. Sixteen of Nepal’s fleet of 25 Twin Otters have crashed. According to Dixit, Nepal Airlines has now lost 70 percent of its 12 Twin Otters to crashes and has only one still airworthy. Even more heart stopping, Dixit’s article in the Nepali Times pointed out that of all crashes since 1955, about 90 percent were due to CFIT.

The reasons are multifaceted. Cut throat competition in the airline business and thin profit margins coupled with political and local corruption has decimated safety nets. The government, struggling after a decade of a vicious Maoist revolt, has shown itself too weak to implement reform in that sector. Many of the smaller planes, such as the one that just crashed, are not provided with weather radar or de-icing. Flying has become a booming business and some pilots are careless and not as well trained as the veterans. Flight dispatchers should also be held responsible but the biggest pressure is on the pilots to fly regardless of bad weather and cash incentives are given for successful landings at destination. Last year a plane crashed at Jomson, when the captain refused to heed instructions not to land in a tail wind.

Late last year, the European Commission blacklisted all Nepali planes from European airspace. Some might think this move irrelevant since no Nepali airline flies that far. But more to the point, they advised Europeans not to fly in Nepal. We have also been advised not to fly on any plane except for Buddha Air which has my eight-year-old son teasing me at take-off that this may be the fastest way to get to Nirvana. 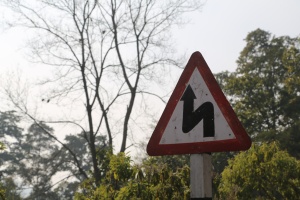 So what are people to do, stick to the roads? Nepal has one of the highest accident rates in the world.  Despite a plethora of signs saying “Dead Slow”, “Sharp Bend,” “Push Horn” and “Accident Prone Area,” trucks, buses and taxi jeeps are overloaded, have non working signals, don’t use headlights and their drivers rarely slow down when they see you coming in the other direction on a road barely the width of a lane and a bit (with a precipice on one side). 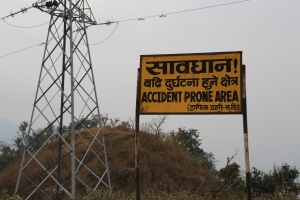 Road signs are an obvious alert to drivers © Donatella Lorch

Truck windshields are an artistic collection of colored stickers, plastic multi-colored flowers, and religious paintings leaving two small slits through which to see the road. Breakdowns are marked by a few tree branches stuck in the back of the vehicle held immobile by a rock behind a wheel gathered from the nearby recent landslide. 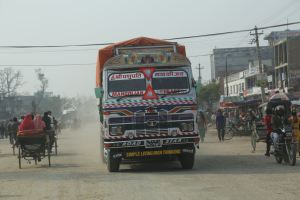 After driving 1000 kms from Kathmandu to Western Nepal, I quickly learned to give up my American road etiquette. Asking “how far” provides useless information. The key is “how long does it take to get there.” The only paved road snaking uphill almost 2000 meters into remote districts of western Nepal is a 134km stretch or a six-hour drive.

A bus drives through a recently cleared landslide on the road to Dadeldhura, Western Nepal © Donatella Lorch

It is marked by 18 roadside rock shrines, engraved with the date and location where a vehicle plunged into the abyss. It is so steep here, that the wreckage remains untouched.  Even the country’s vast population of stray dogs participates in making driving challenging. They curl up and sleep in the middle of the road and like everyone else on the road, they do not give way. In fact, they don’t even wake up. 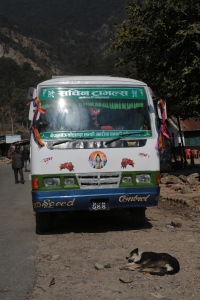 My Nepali friends shrug their shoulders at the dangers. It all boils down to Karma, they say.  If it is your time, it is your time. I have yet to reach that zen acceptance.

The Buddha Air flight back to Kathmandu © Donatella Lorch 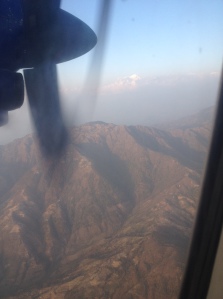 I thought I’d alternate risk. I flew back to Kathmandu on Buddha Air.