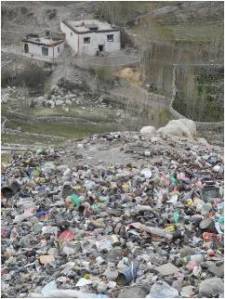 A huge pile of plastic garbage outside the Upper Mustang village of Lo Manthang. The villagers have no means to reuse or recycle it. Copyright Keith Leslie

As any tour company will tell you, Nepal is the land of the Gods. It is the birthplace of Buddha and home to a vast pantheon of Hindu deities. The power of these gods is taken seriously. Even the secular government has decreed that certain sacred peaks cannot be summited as that might anger the god who lives there.  Yet dumping garbage in the country’s national parks and in the conservancy areas apparently does not bother these divine beings. Nepal’s holiest River, the Bagmati that flows into the Ganges, is fetid and dead. Garbage and in particular plastics, are not only a health hazard but fast becoming the biggest threat to future tourism in this country.

“If it continues at this pace, in 10 to 15 years, it will be impossible to trek in Nepal,” warns Jerome Edou, owner of  Basecamp Trek, a travel agency, and also senior advisor to an NGO Plastic Free Himalayas.  www.plasticfreehimalaya.org 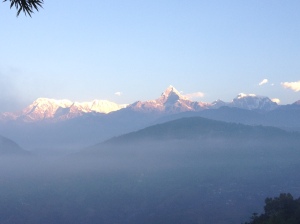 Sunrise over the Annapurna Massif and Sanctuary. Copyright Donatella Lorch

In 2013, over 800,000 tourists came to Nepal. The vast majority of these were trekkers as well as Indian pilgrims going to the holy site of Muktinath among others. If each drinks two bottles of water a day, and uses plastic bags for every purchase, the mountains become home to millions of plastic bottles every year.  As the joke goes: What is Nepal’s national flower? The blue plastic bag.”

Waste management is a critical problem throughout Nepal especially in the Kathmandu Valley with its booming population, polluted rivers and lack of a system to dispose of non- biodegradable garbage. But Edou says cleaning the mountains first can set an example and build a system for cleaning up the entire country. A plastic water bottle takes 450 years while a plastic bag takes 100 years to decompose.

Local mountain communities have tried on their own to ban plastics but the government’s lack of policy and legislation make it a sisyphian struggle. In Chhomrung, in the Annapurna Sanctuary, one of Nepal’s most visited trekking areas, Hem Bahadur, a lodge owner, followed by a dozen others, banned plastic bottles 13 years ago. But how can villages of a few dozen households deal on their own with the garbage detritus of tens of thousands of trekkers and religious pilgrims? 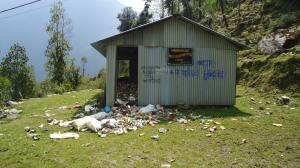 Waste management in Chhomrung in the Annapurna Sanctuary where the local lodges want to ban plastic bags. Courtesy Jerome Edou

There is no ability to reuse or recycle plastics in the mountains. It is dumped in makeshift sites or burned, releasing dioxin, a carcinogen.

Lo Manthang, a stunning medieval village, is the capital of Upper Mustang District, and has been proposed by the Nepal government as a UNESCO World Heritage Site.  In 1992, when Upper Mustang opened up to tourists, plastic bags and bottles were removed from trekker bags at checkpoints. But the Maoist insurgency and lack of government leadership, stalled the anti-plastic movement. Until recently, the garbage of tens of thousands of tourists was just piled up on the town’s outskirts.  The town understood that it was an eyesore and moved it one kilometer away from the main tourist route. Out of sight. Out of mind.

“It could be so simple,” Edou stressed. “Just don’t buy plastic bottles along the way. Use filtered water.” For Edou, there is only one solution in the mountains: a ban on all plastic bags and bottles.  But to do this successfully, the government must promote clean environment in schools, encourage local businesses to produce alternatives and above all require lodges to provide filtered water. There must be a code of conduct for trekkers.

In Nepal, the mountains are a symbol of national pride. Thirty years ago, the mountains were all plastic free. Critics insist there is a lack of political will. Plastic bags are made in Nepal. And plastic bottles are a booming business here as well.

In Nepal, much of everyday life is about access to clean water. Municipal water supplies are inconsistent and unreliable. The history of bottled water in Nepal dates back to 1992 when there was only one brand on the market. There are over 55 now but studies and testing of water quality show that more than 50 percent of mineral water brands do not match World Heath Organization drinking water standards.

The simplest and less expensive alternative, says Edou, is an EPA-approved gravity filter that is already used in some villages. To change a way of life is always difficult. But the alternative spells ecological disaster.