Although Kathmandu’s world heritage sites are well known, few may be aware of a new archeological dig that stretches for several kilometers along the Bagmati River. Deep trenches have been dug out, creating 20ft-high hills made of dirt held together with striations of blue, pink and black polypropylene that tell the 30-year local history of the plastic bag, Nepal’s most ubiquitous landmark.

In the Kathmandu Valley, garbage is the gift that keeps on giving. It is everywhere, stuffed in plastic bags and dropped in drainage ditches or piled high in empty lots, on the roadside or on the edges of the city’s rivers. It is thrown out of bus windows, off roof tops into neighbor’s yards.

Garbage is dumped everywhere including in the open sewers running through this upscale neighborhood. © Donatella Lorch

As long as their house and yard is swept clean, the vast majority of valley-livers don’t seem to care. When it gets too high, the garbage is burned in open areas, the toxic fumes blanketing nearby houses. The plastic bags clog the rivers and choke drainage pipes, creating flooding and spreading fetid, disease-carrying refuse. The health impacts are felt at all levels. 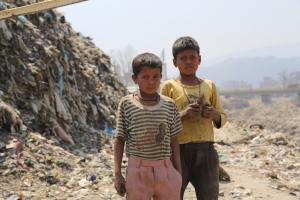 Young boys scavenge for copper wires in the mountain of refuse dredged from the Bagmati River. © Donatella Lorch

Rapid unplanned urbanization has brought traffic jams and choking pollution, but politicians in Nepal’s new government have, with few exceptions, shown little political commitment to solving the problem of garbage. In 2011, the government passed the Solid Waste Management Act that set rules, regulations and fines for transgressors but enforcement is weak and detailed responsibilities are unclear.

Living amid the piles of garbage on the shore of the Bagmati River in Kathmandu. © Donatella Lorch

It is a Sisyphean task. The Valley needs clean water but the sole operating waste water treatment plant is handicapped by more than 12 hours of load-shedding a day and needs to be overhauled. Sewage flows untreated into the rivers. There are no proper slaughter houses in any municipalities and no rules for disposing of the city’s dead cows and dogs. They end up in shallow graves near river banks, leaching into the water supply. Hospitals are responsible for disposing their own hazardous waste such as needles, tissues, organs and other body parts, but the government has not provided a dumping site. Some hospitals burn in the open, and others use incinerators that releases dioxin and furan, two highly carcinogenic pollutants. An exception is the government-run Bir Hospital that has even built a bio-gas plant on its premises.

Open dumping is ubiquitous. Nepalis dump their garbage on roadsides, along river banks and when the pile grows they burn the plastic bags cloaking neighborhoods in carcinogenic dioxin. ©Donatella Lorch

Sumitra Amatiya, executive director of the Ministry of Urban Development’s solid waste management technical support center, says sanitation in the Valley is in a state of crisis management. Serving Kathmandu and Lalitpur, the valley’s only working landfill, Sisdole, 24 km from the capital, is almost full and during the monsoons is frequently cut off from the city by floods and landslides. The government has bought the land for another site but needs billions of rupees and at least four years to make it operational, according to Dr. Amatya. As a gap measure, they are expanding Sisdole. The Asian Development Bank, which last year published the most researched and detailed Solid Waste Management report on Nepal to date, will begin work later this year on Kathmandu’s waste-water treatment plant. The government has begun dredging the highly-polluted Bagmati, with the aim of laying down sewage pipes as well as planting green areas. It is unearthing tons of dumped plastic and earth but narrowing the river-bed, which experts says can cause severe flooding during the monsoons, spreading disease through its water.

While many Nepalese care, city life has eroded the social dynamic of communities that galvanize neighbors to act together. Many try to make a difference. But they are not enough. One ongoing high-visibility clean-up campaign, lead by Leela Mani Poudyal, the chief secretary of the government of Nepal, has been bringing hundreds of people together to clean the fetid Bagmati every Saturday morning for the past 45 weeks, but a one time cleaning, though highly commendable, is not a permanent solution and it will not make the river waste-free. In addition, small non-governmental organizations, many of them focusing on women, teach composting and garbage segregation.

Politicians are quick to point to a new landfill as the solution. But only 40 to 50 percent of the Valley’s garbage goes to Sisdole, and most of it enters the dump unsegregated. The rest ends up on the streets and rivers. Changing the Nepali mindset is the only way forward, Dr. Amatya believes. Composting is key as 60 percent of Kathmandu garbage is organic. There is the need for a government-supported country-wide public awareness and education campaign about the 3Rs – Recycle, Reuse, Reduce in schools, in the media, door to door. Nepalese need to understand the environmental damage of one-time-use plastic bags. As Bhushan Tuladhar, regional technical advisor (South Asia) of U.N. Habitat , put it: “We have to dump the attitude.” Only a social movement can keep Kathmandu from being buried in garbage.