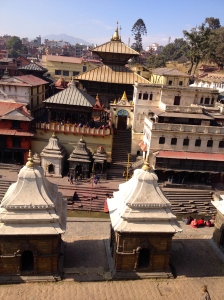 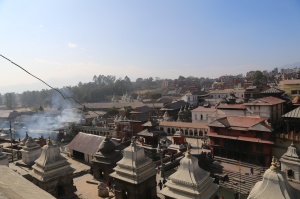 Pilots do visual landings into Kathmandu, first skimming then dipping down sharply over the rims of the nearby hills that encircle the valley and stopping at the end of a runway that abuts the city’s downtown.  There is no long highway into town, no time for visitors to slowly absorb the capital city’s chaotic traffic, smells, dust, colors or history. Everything is there —- immediately.

Just drive through Tribhuvan International Airport’s huge orange and gold gateway, make a right, pass the golf course and you arrive, just a few hundred meters from the runway, at Pashupatinath, one of Kathmandu’s seven UNESCO World Heritage sites, and one the world’s holiest Shiva Shrines. It doesn’t look very sacred from the outside especially if you enter through the gauntlet of stalls selling religious knick knacks, but amid the huge bewildering pantheon of gods in Nepal, here you have reached the apex of Hindu spiritual power.

The site, on the banks of the Bagmati River, the country’s holiest river that feeds into the Ganges, is in a big park and consists of a collection of temples, shrines and cisterns that were first built in the 4thc AD though the main pagoda styled temple was also rebuilt in the 17thc. These days, the Bagmati’s other claim to fame is its overwhelming filth. The river is dead, a thick, slimy grey liquid, lined by garbage and coating nearby neighborhoods with its choking stench. Added into the complex are a hospice and a temple doubling as an old age home founded by Mother Teresa where homeless elderly live amid devotees ringing sacred bells and making food offerings at the myriad mini shrines.

Here Shiva is the Lord of the Beasts not the fearful and destructive Bhairab and devotees flock to worship him from all over the subcontinent and the world. Non-Hindus are not allowed in certain parts of the temple. I brought my four kids here so they could see, touch, smell and experience Hinduism and its rituals for the first time.  We share the shrine’s stone paths with devotees, tourists, wandering cows, scrawny stray dogs, beggars and what our guide calls “the Hollywood Sadhus,” the ash coated and orange-dressed bearded holy men who demand money for pictures. 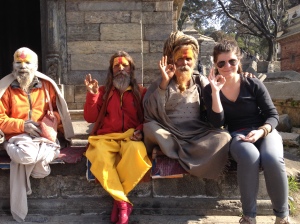 Pashupatinath is also a favored location for Hindu cremations. It is the open presence of death that I think shocks western visitors the most. As the smoke from the pyres wafts over and around us, Richard, our Christian guide from India, brings us to a terrace overlooking two on-going cremations to describe the technicalities and the ritual. Bodies are cremated rapidly after death, preferably the same day. The body is first taken to the edge of the Bagmati and the feet dipped in the water, symbolically the last effort to see if they are still alive. It is then carried to the ghat and placed in a pyre of wood to burn between three and four hours. Women are fattier and take longer to cremate. The umbilical cord, which apparently does not incinerate, is buried in the soil of the shallow Bagmati, as part of the cycle of rebirth. In a complex ritual, the relatives receive the ashes and then go to the other shore of the Bagmati for puja (worship) before giving the ashes to the river. The northern most cremation area is reserved for the royal family. Here in 2001, the king and queen and eight members of the royal family, who had all been gunned down by the crown prince, were simultaneously cremated. 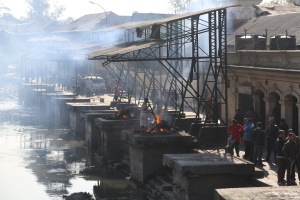 My eight year old is okay with all this. He has been living here for six months and sees cremations in the neighborhood temples where we live. The word “Puja” is an integral part of his vocabulary. He knows that pious Hindu adult sons must wear only white (shoes too) for a year when their father dies and when we drive through town, he regularly points out the men in white. He knows that for the first 13 days after a father’s death, a truly pious adult son lives alone and can only shower outdoors. He cannot touch anybody, eating only once a day boiled rice with ghee, lemon and fruit. He cannot sleep with his wife.

My teenage boys, at school in North America and both argumentative philosophers, are keen to discuss the meaning of life. For my 21-year-old daughter, I think listening to the crackle of the pyre and watching the stoker push back embers around a protruding foot, is part surreal and part overwhelming. The public and physically intimate ritual of handling a dead person does not exist for us. When a relative died recently, we all said our goodbyes as she lay in a hospital bed. A few days later, we received the ashes. The ritual, if there was one, was highly impersonal. I wonder what the elderly who live in the next-door hospice think when the distinct smell of burning human flesh wafts into their abode. 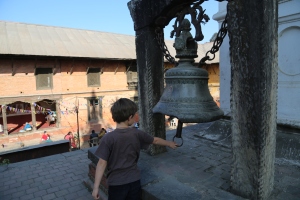 But Pashupatinath is not only about the dead. It is about a vast number of festivals, daily pujas and ceremonies. One of the biggest yearly festivals, the Maha Shivaratri (Great Shiva Night), falls on February 28th 2014. Thousands of Sadhus come from all over Nepal, India and the rest of the world for a week of prayer, smoking marihuana and bathing in the Bagmati.  Some strip naked. Mark your calendars.

1 thought on “In Nepal, Life and Death Meet in a World Heritage Site”