Mitho taking a rest on our run together © Donatella Lorch

I met him by chance on one of my morning runs. Three black dogs sleeping in front of a gate, a fixture on my trail for almost a year, had lifted their heads briefly as I greeted them but I didn’t notice the small tan and white newcomer trotting behind me until he almost tripped me. He stopped when I stopped, sitting and cocking his head and looking up quizzically. He had mange on his lower back and he was rather skinny but he wasn’t aggressive or pushy. For the next four miles, as I zigzagged through a small village and terraced golden wheat fields, he tagged along by my right heel, never passing and immediately sitting when I’d stop to check on him. Our conversation was rather one-sided as I outlined for him all the reasons I could not keep him. By the time I got to my front gate, I had named him Mitho (pronounced Mee-toe), Nepali for ‘sweet.’ He gulped down the food and water I gave him but when I checked on him half-hour later he was gone.

In Nepal, there is a special day dedicated to dog worship. On Kukur Puja, many of the city’s dogs are garlanded with marigolds and are fed sweet rice cakes. But this warm feeling does not seem to last long. Mitho is one of hundreds of stray dogs that live on the streets of my neighborhood on the southern edge of the Kathmandu Valley. He is one of more than 30,000 stray dogs that call greater Kathmandu home. They sleep through the day, mounds of brown, black and white fur, oblivious of traffic that is forced to detour around them. They howl and fight at night, dodge traffic and beg for food and water from shopkeepers. Their favorite hangouts are the three-sided one-room roadside butcher shops where I frequently spot three or four dogs politely sitting at a discreet distance hoping for scraps while keeping an uneasy friendship with the tethered goats outside awaiting the knife. You’ll find the dogs scavenging in the garbage-filled plastic bags in the city’s ubiquitous open-air roadside dump sites. In winter, they shiver from the bitter cold and the weaker ones die off; in the summer, they suffer from dehydration in the torrid heat. Unvaccinated and mostly un-neutered, they succumb to parasites and nasty skin infections. They are frequently abused, kicked, hit and even scorched by boiling water. They are maimed and killed by motorcycles, cars and trucks. Fifty percent of their puppies die.

Stray mother and children in the countryside in Southern Kathmandu Valley. ©Donatella Lorch

I had a healthy fear of stray dogs when I moved here ten months ago. There were two main reasons. Dog-carried rabies is prevalent in Nepal, killing over 200 people a year. Since the mere trace of an infected dog’s saliva on an open cut can give you rabies, a disease which is more than 99% fatal once the symptoms appear, we dutifully received our three anti-rabies shots. Let’s note here that the shots only delay the symptoms and give you a slightly larger window to get more shots. I warned my nine-year-old never to pet a stray dog.

My dog, Biko, gets worshipped on Kukur Puja, and receives a garland, a Tikka and sweet rice cakes. © Donatella Lorch

But perhaps more immediately relevant for me was my large, 85 lb Rhodesian Ridgeback, Biko, that my four kids insist is my main love. I am not ashamed and can openly admit it: I am a dog lover. Biko was a four-year-old bundle of energy when we arrived in Kathmandu, and he needed daily walks. But how do you walk a pampered house dog through a city littered with strays? The stray dogs in Kathmandu mostly ignore humans, but they are very attentive to any outside dog that comes into their territory, and—though they may be feigning sleep when we walk abreast of them—they often turn into barking, howling, snarling villains when our outside dog passes by. Think dog fights—our house dog against a pack of street-hardened dogs. Think rabies. We quickly learned that there was only one way to proceed: with intimidation. We had to convince the stray dogs in our neighborhood that Biko belonged to our pack, and that our pack was as tough, or tougher, than theirs. In our tentative first efforts, four of us armed with long sticks escorted Biko on his walk, a Nepali version of armed Kenyan rangers protecting individual Rhinos. Most of our neighborhood dogs now grudgingly let us through. Today, I may still carry a stick but I walk Biko alone. 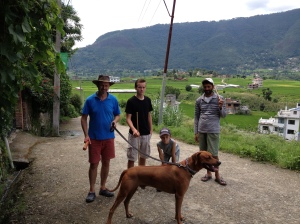 I am no longer scared of the dogs I meet. Mostly it makes me sad to see so much loveless suffering. I may not pet them but I talk to them and bring them scraps from restaurants. I have my favorites like the Tibetan Mastiff mix outside the Roadhouse Café in Patan, or the gaunt timid bitch down the street who has obviously had too many litters and submissively lies down wagging her tail when I pass.

The world of the Nepal stray dog is divided into societal gradations. The biggest group is the community dog. They do not necessarily belong to individuals but are outdoor dogs with a narrow territory and the community feeds them scraps and leftovers. These are the nighttime howlers and many become outcasts when they are maimed in dog fights, hit by vehicles, or acquire mange and other disfiguring skin infections. Some dogs are tightly chained to buildings with barely the ability to lie down. The smallest group is the dog as personal pet. Many Nepalis fear dogs and are incredulous at the affection I show Biko and how I care for him.

Twenty years ago, the government poisoned stray dogs to keep the dog population in check. Death came after hours of convulsions. Small NGOs reliant almost entirely on donations, bring in some dogs for neutering and spaying and then return them to their area. Most often it is the volunteer work of a few for the many.

A dog is recovering after being run over by a motorcycle at Kate Clendon’s “Community Dog Welfare, Kopan” ©Donatella Lorch

Biko’s Nepali vet runs an animal shelter and volunteers to treat injured animals. Kate Clendon, a New Zealander who is a longtime resident of Kathmandu, is now housing 31 dogs at her Community Dog Welfare Kopan. She eases the last days of the ones with blood parasites, finds sponsors for the ones with disabilities. She does community outreach and last year vaccinated 150 dogs. Neighbors now bring her injured dogs. She is looking after newborn puppies abandoned in the middle of the night at her doorstep. Each dog has a name and history that Kate can relate in detail. Leo has two broken legs and is getting a wheelchair from a Swedish sponsor.

Jade has mange that has not responded to medical treatment. ©Donatella Lorch

Tiger had his back sliced by a Kukri (a curved Nepali knife), Jade has mange, Dorje was beaten and has joint problems. Kate knows what she does is a drop in the ocean. “To have a long term impact it’s more about changing attitude,” Kate insists. “Nepalis need to be more responsible and have more respect for dogs.”

As Mitho ran with me, I made a list of what he needed: rabies test and vaccines, deworming, delousing, a bath and lots of food. That I could do. But he could not live with me. My husband has threatened divorce if another dog enters the house. I toyed with the idea of placing Mitho’s photo on Facebook and convincing friends to foster him or even adopt him.

Hugging Biko at the end of the day. ©Donatella Lorch

But even I knew that was daydreaming. I went home and I hugged Biko.

4 thoughts on “Worshipped yes — But in Nepal, it’s a tough life to be a dog.”