Growing up in New York, I rarely associated religious festivals with a national or even a city holiday, though occasionally alternate side of the street parking was suspended – to my father’s delight.

Half way around the world, Nepal has taken the idea of religious festivities to another level. Beginning in late August and continuing until the end of October, religious festivals follow each other like tumbling dominoes, occasionally bridged by government holidays. The festivals can last a day or a more than a week. Parking, though, is not an issue in Kathmandu, a capital where parallel parking has yet to be discovered and the rule on the hair-raising narrow roads seems to be: “Never give way.” 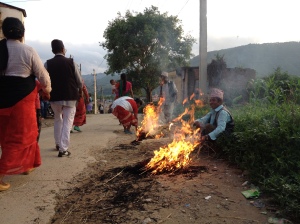 Fires are often part of religious rituals as these impromptu ones along a procession route. © Donatella Lorch

It is a season when the complexities of Nepali society seem to surf above the capital’s physical chaos, pollution, political disorder and venality. The ties to yore, to myth, to custom and to religion may be a matter of worship or just a question of habit or a mere acquiescence to an insistent mother-in-law. In any case, Nepal’s festivals are not a matter that can be ignored.

Depending on how you look at it, life in Kathmandu either slows down as stores and offices close or it hums with an entirely different undercurrent. There are different colors, smells, noises. Traffic jams change locations. In Nepal, the kaleidoscope of Newar, Tamang, Chhetri, Brahmin and other holy days challenge the most ardent ritualists, who consult multiple types of calendars not only to stay connected with the outside world but also to follow the local customs. Most of the calendars are based on a lunar cycle, so every year, schools, offices and government nimbly have to readjust their schedules. To keep everyone on their toes, some holidays rely on astrologers. 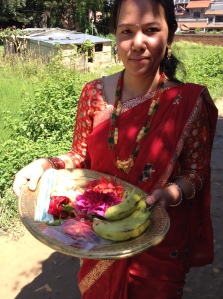 In Nepal, Puja is intertwined in every aspect of daily life.©Donatella Lorch

This year, the season began on August 10th, with Janai Purnima, when Brahmins and Chhetri communities go visit their guru to have their sacred thread changed. For good measure, there are those who add on a dip in a local river. Just a day later, on the 11th is Gaijatra or Cow Festival, a huge event in the Kathmandu Valley, when you decorate your cow or one of the many stray bovines in your neighborhood and join the dancing, singing parades. Some choose to wear cow head-gear. It is meant to pave the way towards heaven for any relative that has died that year. As the end of the month nears, there is Father’s day and close by the day when Hindu priests give (or more precisely sell) the faithful some ‘Kush grass’ so that Vishnu will live in their home for the coming year. 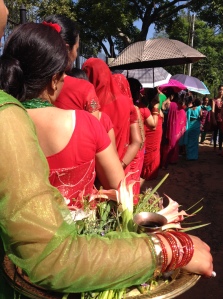 On Teej, women queue on long lines to worship at temples all over the Kathmandu Valley and beyond. ©Donatella Lorch

Some festivals are all-inclusive, others pick their ethnic group, pointing in numbers to the changing ethnic powers in the Kathmandu Valley. Take Teej, which is followed by Chhetris and Brahmins but not by the Newars, the area’s original inhabitants. If color is a sign, then the Newars are far from being the majority they once were.

For the five days of Teej, observant women wear red saris, turning the entire valley into a red sea. The government closes down the roads in one of the busiest sections of Kathmandu so that thousands of red clad women can worship at Pashupatinath, one of the holiest Shiva shrines in the world. Red saris are scrunched against the windows of overloaded public buses or billow elegantly in an Isadora Duncan sort of way on the back of motorcycles. Teej is billed as a woman’s festival – but it is really about the men, for it is a time when a woman either prays for the well-being of her husband or, if she not already married, for a husband-to-be.

If a woman is very traditional, she will fast and she will also bathe her husband’s legs and drink the run-off water. This has some of my women friends in the States decrying marital abuse. But watching these red saris dancing in front of temples, standing and chattering on endless lines with their girlfriends and daughters, puja (offerings) and smart phones in hand, all bedecked in traditional gold jewelry, it is clear that, for them, Teej is not only about bonding but also about a great escape from endless daily chores and demanding husbands. It’s a time of year when gold prices in Kathmandu skyrocket. I’m inclined to believe that if you acquire new jewelry and a new sari, and spend five days with your friends, worshipping a husband is a fair exchange. 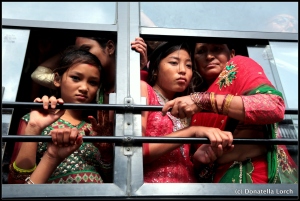 Women in traditional “wedding day” saris are scrunched on buses returning from worshipping at Pashupatinath, one of the world’s holiest Shiva shrines. ©Donatella Lorch

The festivities don’t end with Teej. A short break afterwards, there is an eight-day Indra festival in Kathmandu. More masked dancers and drums in procession with the Kumari Devi, or ‘Living Goddess,’ blocking more traffic. And then Nepal’s most universal and longest festival – Dashain – begins and continues for about 15 days. This year it falls at the very end of September. On the surface Dashain is a celebration of the victory of gods and goddesses over demons or of good over evil, but between the prayers, it is mostly a celebration of family and community. Flights into Nepal have already been booked for weeks now. Nepali migrant workers in the Middle East borrow money to return home, others fly in from the U.S. and Europe. Kathmandu empties out as families return to their ancestral villages spending long hours on buses and often walking the last bit to grandma’s old mud- wattle or stone house. Aside from hotels and a few restaurants in the tourist neighborhoods, Kathmandu shuts down. The sky is a jumble of kites maneuvred by young kids on rooftops. The chaotic traffic jams and the smog melt away.

This is a time of sacrifice – animal sacrifice that is. My friend Keshav, has been fattening his mutton for three years just for this year’s holiday. On October 1st this year, the day will begin with the army’s ritual throat-slitting of scores of buffaloes and then everyone has the go ahead to kill and feast on their own buffalo or goats and the drain-less roads will be covered in blood. Even if you live in an apartment, there is pressure to buy and butcher your own animal. 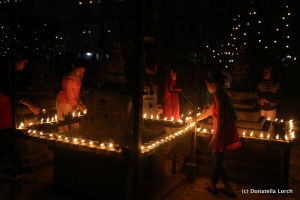 My favorite festival is none of these, but comes a bit later. After the dancing, chanting, techno-filled boom-blasted nights of Teej, just passed, I look forward to Tihar, the festival of lights, at the end of October. If poetry can transcend words, it is found at night in Patan’s old city. Every household creates on their road-side stoop mandalas of rice and painted flour lit by butter lamps. The narrow roads cornered by ancient temples are full of families strolling or going to prayer in the flittering, smoky lamplight. If there are no power cuts (and the government goes out of its way to avoid them during Tihar), cascades of Christmas lights decorate the taller buildings. Of course, modern times intrude. On Tihar, it is traditionally auspicious to buy metal; these days that means buying electronics, and so phones, televisions and stereos sell briskly. 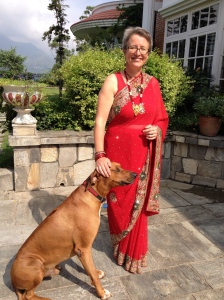 I too turned red – briefly. My dog, Biko, was just a prop. ©Bimla Shiwakoti

Luckily, when it is all over, I won’t suffer from withdrawal. There are of course many more festivals during the year but in the meantime I still have my neighborhood Hindu priest to remind me I live in Kathmandu. Without fail, 365 days a year, he starts clanking his bell to wake Shiva at 5:15AM. I lie in bed, counting the 25 to 31 reverberating sharp and hard rings occasionally enhanced with some megaphone chants. When I moved here a year ago, the head-thudding noise forced me up and out of bed but these days, it has a soothing quality, alternating with the baying packs of neighborhood stray dogs and the coo-ing pigeons on my windowsill. I roll over, a smile on my face, knowing that the ancient is still there to guard the new day.

2 thoughts on “Where ancient rituals rule in modern times — ‘Tis always the season!”