A stray dog sleeping off the winter chill in the Kathmandu Valley. ©Donatella Lorch

I like to think that feeding the dogs has made me a better person. But that would elevate me to a place I don’t belong. At first, when I moved to Kathmandu almost two years ago, I was scared that one of the many unvaccinated stray street barkers would attack Biko, my 95-lbs Rhodesian Ridgeback when I took him out for walks. Nights, they howled, yelped, ululated and whimpered incessantly, up and down the street, echoing into the valley and down onto the main road. They were part of the cacophony that drove me crazy my first months in Nepal. In addition to the dogs, I fantasized about shooting the pigeons on my window sill, snaring crows that dropped rotting bones on my porch and sneaking in pitch darkness over to my neighbor’s house to cut his electricity wires and terminate the high pitched Bollywood songs that could not be blocked out even with earplugs and pillows over my head. 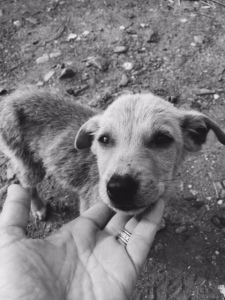 More than 50 percent of stray dog puppies do not survive past their first six months. ©Donatella Lorch

There are about 20,000 stray dogs in the Kathmandu Valley though only about 30 of them live in a square block area around my house. Eight of them live on my street. They are community dogs in the sense that they live their lives out on a territory of a few blocks and are fed scraps by shop owners and passersby. They drink from the open sewers. I have seen them occasionally petted but more often kicked, tortured by little kids, hit or just ignored.

Last August, one of them, a long-legged, thick-haired black female was hit by a passing car in front of my house. Not wanting her to wait for death while lying in the ditch (or maybe not wanting to see her wait for death), I called a mobile vet who anesthetized her on the spot and brought her down to the animal hospital on the back of a motorcycle. This wasn’t a great act of charity on my part. Transport, vaccinations, deworming and three days of treatment for an injured back leg, after some bargaining, cost me less than $50. I promised my husband that I would not adopt her. She returned to the streets.

I named her Raksi, after the local moonshine. She’d been blinded in her left eye by a sharp object and had a habit of rolling her head to a side so as to expand her field of vision, just like the neighborhood drunk next door. I started to feed her every day outside my gate. She’d recognize my car as soon as it turned the corner and in her trademark weaving run, head up the middle of the road regardless of on-coming speeding buses. Raksi has more than street smarts. Fortified by the daily meals, she rapidly became the self- entitled queen of my street, ruling with a bossy and iron hand that consisted of barking and biting her contemporaries. Other canines, when they see Raksi, are quick to give up sunny sleeping spots and scrounged food. Her single-mindedness turns aggravating when she dashes through our opening gate and makes a run for the house and the kitchen to plop down on Biko’s bed, fleas and all. No pulling, yanking or yelling can get her out, only luring her with dog biscuits. Unlike any of the other strays I have encountered, she greets me with high chest jump, tail wagging and sharing mud and dust. She uses her mouth as a hand shake, gently holding my hand with her very sharp white teeth.

Meal time in front of our gate. Raksi is on the far left. ©Donatella Lorch

Feeding only one dog does not work in Kathmandu. Raksi’s highly subservient partner soon joined her. Tentative and weak, we named him after a local politician. He had mange. Another veterinary bill. A red brown Raksi look-alike followed suit. Neighbors say she is a half sister, so we called her Whiskey to keep the alcohol theme in the family. Feeding time on our driveway is now a juggling art as Raksi needs to start eating before the others or an all out whirlwind brawl ensues. The gate gang has also adopted Biko, whose philosophy on his daily walks is that most dogs are to be ignored or barely tolerated. His attitude does not impress Raksi. Irrepressibly playful, she jumps on him, licking his nose and they occasionally chase each other around our lawn in a mad frenzy. They all follow Biko on his daily walk. Whiskey rolls on her back, feet up in total subservience when he approaches. Raksi places herself between me and Biko. If a strange dog approaches, Raksi takes the lead, barking to make him back away.

Biko and Raksi in a mad race. ©Donatella Lorch

I find it hard to say no or even to set a limit at five. I fed a terrified pregnant bitch – we named her Kali – both before and after her nine puppies were born. Raksi was impossibly nasty, attacking her every day with bared teeth. I hated Raksi then. And on many days, I find her hard to tolerate. Yet I do respect her and that irrepressible chutzpah that I know makes it possible for her to survive and thrive on the street.

An exhausted Kali and some of her nine puppies. ©Donatella Lorch

As a child, growing up in a Manhattan apartment, I relentlessly begged my father for a dog. He attempted to console me with a total of 16 parakeets, though thankfully not all at the same time. My husband gave me Biko, my first dog, as a Mother’s day present six years ago when we lived in Kenya. My four kids tease me that I love Biko more than any of my human children. But no one gave me Raski or her gang. Knowing them, means I am no longer intimidated by all the other plentiful strays. I’ll catch myself talking to these Kathmandu denizens as I pass them on my runs.

I carry dog snacks in the car for the dogs at the airport and at my son’s school. And cocoon-like, the hours of nighttime barking now lull me to sleep. I can easily recognize Raksi’ s lilting shrill howl. Kathmandu is without doubt my home.

4 thoughts on “Where Stray Dogs Make my Street Home”